What is Mandela Day?

Nelson Mandela International Day was launched in recognition of Nelson Mandela’s birthday on July 18, 2009 via unanimous decision of the United Nations General Assembly.   It was inspired by a call Nelson Mandela made a year earlier, for the next generation to take on the burden of leadership in addressing the world’s social injustices when he said that “it is in your hands now”.   It is more than a celebration of Nelson Mandela’s life and legacy. It is a global movement to honor his life’s work and to take action to change the world for the better.

For 67 years Nelson Mandela devoted his life to the service of humanity — as a human rights lawyer, a prisoner of conscience, an international peacemaker and the first democratically elected president of a free South Africa. Let us join a call by the Nelson Mandela Foundation to devote 67 minutes of our time to helping others, as a way to commemorate his life.

Mandela Day is a global call to action for citizens of the world to take up the challenge and follow in the formidable footsteps of Nelson Mandela, a man who transformed his life, served his country and freed his people. Its objective is to inspire individuals to take action to help change the world for the better and in so doing, to build a global movement for good.

UNESCO Center for Peace will be leading a wide range of regional and international institutions, local governments and diplomats in an effort to host the first annual Nelson Mandela Day on July 17-18, 2015, in Frederick, Maryland.

This event will honor Nelson Mandela by advancing his life-long mission of peace in South Africa and throughout the world. This event will bring together Peace Nobel Laureates, Educators, Mayors and Activists in an effort to spark a world movement that will impact people of all nations in the quest for world-wide peace.

We want to celebrate Nelson Mandela by organizing a three-month series of events centered on Mandela’s “three rules”: “Free yourself; free others; serve every day.”  International Nelson Mandela Day set for July 18, 2015, in Frederick, Maryland, will be the culmination of these three months of activities and events.

We are organizing a conflict resolution workshop and presentations about how we experience conflict and peace in our own lives. The session will be led by CALM, Inc.; the Frederick based Community Mediation Center in collaboration with other regional and international partners.

May – “free others” month

In May we will engage students in the region through a multimedia competition in an effort to expose them as well as the general public to the Peace Nobel’s legacy and its relevance in today’s world in the light of current challenges. A number of films/documentaries showcasing the struggle to free South Africa from Apartheid will be shown throughout the region.

Community organizations such as the Frederick Community Action Agency, United Way of Frederick County and others will provide the community with opportunity to serve. We will launch a campaign to encourage businesses and individuals in the region to pick at least one day during the month to engage in a community service activity.

All these activities will culminate in a two-day commemoration in July 17 and 18 2015 with a number of events designed to pay tribute to the Peace Nobel Laureate.

“It is time for the next generations to continue our struggle against social injustice and for the rights of humanity. It is in your hands.” 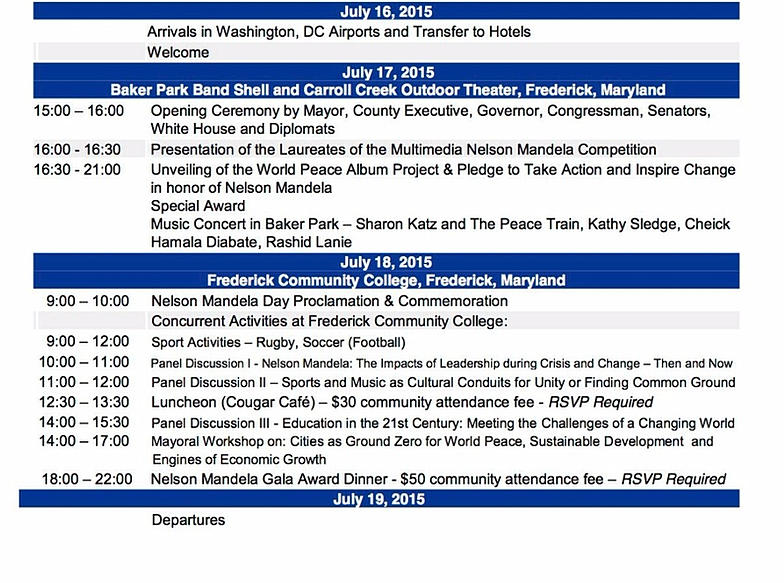 Please contact Sharon Welch at swelch@unescocenterforpeace.org for any arrangements or further information.

THE INAUGURATION OF UNESCO CENTER FOR PEACE NY STATE CHAPTER

George On Christophides Official Visit to The USA

Child Labour: A Day in the Life

There are no upcoming events at this time.

There are no upcoming events at this time.